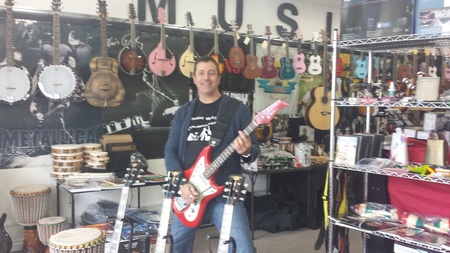 Steve Esagui,  started playing guitar at five
years old and has been in the music
industry all his life.

In his early years as a professional musician
performing with several bands, and even as
a solo artist in New York City and the New
Jersey shore he became aware of the high
prices for professional equipment.
Understanding the need for a retail music
store where musicians could afford to purchase all their instruments, he opened his first music center..

Thirty years later upon his visit to Oregon, he realized the importance of family, and noticing
also the abundance of nice people he met, he decided to call Oregon, his home.
He opened his new  music center in Lake Oswego, November 1st, 2015, where he continues to follow his
dream  of providing at affordable prices what he calls, Fun Instruments.